The information given to an individual or a group about its prior behaviour and the consequent impact, so that the individual or group may adjust or reinforce its current and future behaviour to achieve a mutually agreed or desired result.

There are many misconceptions about the practice of giving feedback. Some people see it as an opportunity to make a judgement about the other person or what they have done; they use it as a vehicle to tell them how to be something else or to do things in what they consider to be a better way. Very often feedback is only given when something goes wrong. To the contrary, feedback can and should be used as a tool to improve and maintain performance as part of an overall personal development process. The right kind of feedback can actually reinforce positive behaviour and actions, as well as draw attention to anything that is ineffective and that stands in the way of achieving good results. The fear of giving feedback is linked to a number of different issues:

The practice of giving feedback is too often restricted to the annual performance review. This makes giving feedback more of an isolated event, separated by distance or time from the events to which it is related, and it is then approached with some trepidation by all parties. Replace this with the habit of offering regular and frequent feedback to those with whom you work.  Praise them for their accomplishments and achievements as well as making suggestions about how things could be done (or could have been done) differently. This is likely to make a much more positive contribution to continuous improvement in the workplace and it means you get much more practice in the art of giving feedback.

Those who give feedback frequently do not know how to conduct an effective feedback conversation confidently. It is not unusual in some workplace environments or for people new to managerial responsibility to lack the knowledge or awareness about HOW to give effective feedback.  This knowledge gap can be bridged  by using a model (see below for the STAR model) to give the feedback conversation a clear and transparent structure. Having a process to rely  on will help you to be  more confident at creating opportunities to provide feedback and you will be able to refine your skills and competences.

Many barriers are created to feedback being well-received if the person giving the feedback simply makes judgements about the person receiving the feedback. Unsurprisingly, fear of giving feedback is linked to the kind of reaction we expect to see from the other person. If they feel judged or unfairly criticized the conversation may become difficult or it may lead to conflict. You can prevent this by NOT judging or being overly critical in the first place. Feedback is much more likely to be well-received if you assess the other person’s behaviour and actions rather than making a judgement about them as a person. 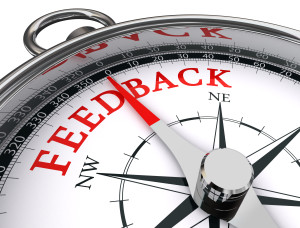 There are several models for giving feedback. A universally accepted and simple communication model called STAR provides an excellent way of managing a feedback dialogue.

There are actually two phases in applying the STAR model.

Here is a sample of a typical dialogue that might occur following this model:

Situation:  “Nadia, I have asked you in to talk about the data base for key account management.”

Task:  “At our September team meeting you undertook the task of setting up a new system to manage our key accounts. The agreed deadline for your proposal was the end of last week.”

Action (1):  “I have just found out from Marcus that the proposal is not ready. The deadline has been missed and you neglected to tell me yourself.”

Result (1):  “Head Office is now calling me every five minutes to find out what the status is and we are under pressure to deliver. I have no information to give them.”

Action (2):  “I would have greatly appreciated being informed in advance of your difficulties in getting the proposal done on time.”

Result (2): “With this information, I could have taken pre-emptive action and warned Head Office of the delay.”

The STAR model allows feedback to be given in an objective and non–judgemental way because you are focusing on the behaviour and not the person or their motivation.

This tip has been adapted from “Coaching for Innovation” (2014, Palgrave McMillan) by Cristina Bianchi and Maureen Steele.