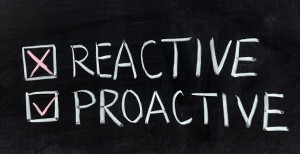 Reactive organizations – and the people who work in them – are driven by circumstances and their environment. They are acted upon, rather than taking control and being in control. In a reactive organization, it should come as no surprise to find that people are constantly stressed and putting out fires instead of working together to blaze a path forward.

There may be danger or opportunities ahead, but if no one no-one rises above the trees to see if the organisation is heading in the right direction, then you, your colleagues and  your organization will consistently be struggling to face them.

What if you changed the way you approach your work so that you’re not constantly being acted upon, but, instead, driving the action?

In Stephen Covey’s best selling book, The 7 Habits of Highly Effective People, he encourages people to become more proactive and less reactive. “Reactive people are driven by feelings, by circumstances, by conditions, by their environment. Proactive people are driven by values – carefully thought about, selected, and internalized values. Proactive people are still influenced by external stimuli, whether physical, social, or psychological. But their response to the stimuli, conscious or unconscious, is a value-based choice or response.” Being proactive enables people and organizations to not simply pick the best path, but to also be prepared for opportunities and obstacles along the way.

When you make a conscious choice to be proactive at work, you look for ways to take the initiative, to come up with new ideas and new ways of doing things. An approach like this can ultimately save money, time, and resources; lower risk; improve the bottom line; even lead to innovation. So why not do it? You may be thinking, “Who has time for these changes? I’m still too busy putting out fires!” But this is reactive reasoning. To think that you or the people in your organization are just too busy to even try and see the bigger picture is a mistake. It will secure your organization’s fate as one that continues to be acted upon and unable to influence others, rather than one that encourages and welcomes positive change. 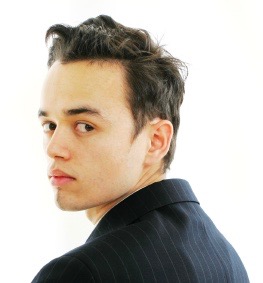 onstantly searching for success. He had had eight jobs in five years. Each had failed to met his expectations. Each time he had fallen out with his manager and the market conditions for each business had not been “quite right”. “Customers just aren’t coming through the door,” he stated frequently. Lack of success certainly was not due to lack of effort. He was constantly busy and rarely had spare time for anything else. He regularly talked about it being “a tough world out there” and yet each new challenge resulted in the same familiar disappointment. He talked about not wanting to make the same mistakes again, particularly in terms of his choice of business and manager but somehow he always did.

orked for a large organisation and was clear that although the organisation was slow and bureaucratic in its style, she wanted to stay and make a difference. She wanted to be a key player in the management of change towards a culture that was more open, supportive and honest than at present. She recognised that her level of influence in her current role was limited and had mapped out the future roles she wanted that would increase that influence to introduce the changes she believed to be important. She knew that if she waited for others to make this happen she might wait forever. There were also many significantly older mangers in the company. One thing that struck you about Christine when you met her was that she wanted passionately to achieve this future. Her face lit up and her eyes sparkled as she talked about what was important to her. She spoke positively of what she wanted and yet was respectful of other people’s views and opinions. People enjoyed her company.

Which approach would you rather take?

Explore more tips from our Treasure Chest to support your goal of encouraging change at work:

The comfort zone and beyond

Break out of the box