Make a brand new ending for yourself 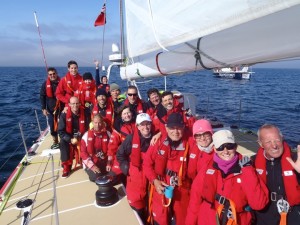 When I applied to compete in the round the world yacht race, I had never sailed before. When I completed my application, I nearly typed “I can’t sail” and that’s a great example of the power of your mind. If I had truly held that belief, then I would never have signed up. I certainly did not know how to sail a 70 foot racing yacht. Yet I believed that due to the transferable skills I had from my various life experiences such as the ability to learn new languages, then I could certainly learn the language of sailing vocabulary. Also, if I had learned how to race up hills on my road bike and ride for over 150km, then I definitely had the skills of balance, stamina, strength and resilience which would be invaluable during the race.

I had never even tried to sail, so how would I know that I “couldn’t” do it? As it turned out  I am pretty good up on the foredeck, not so good up the mast and in a racing scenario someone more adept than me would be better on the helm. I did in fact race over 43,000 nautical miles in 11 months – not bad for someone who nearly wrote that she “can’t” sail!

Do you sometimes have that monk 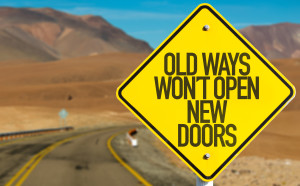 ey on your shoulder – also known as the negative voice in your head – that tells you that you shouldn’t or can’t do something? That voice might stem from a bad past experience or relationship, or you simply think that you can’t or shouldn’t for no other reason than that is what you choose to tell yourself.

I used to think that I would not be very good at public speaking because my nerves would inevitably get the better of me. I resolved this by choosing to speak to a number of people who I considered great public speakers to find out what they did that made them, in my eyes, great speakers. I discovered that it wasn’t so much what they DID but rather what they thought that made the difference.

One of them chose to believe that the butterflies in their tummy was excitement rather than nerves and therefore what they were about to do was going to be an enjoyable, exciting experience. Another chose to believe that every single person in the audience wanted them to do well and was consciously willing them to succeed.

I believed that by undertaking the challenge of racing a yacht around the world, that when I returned and stepped off the boat, whatever happened, whatever the circumstances and however I felt, that I would be absolutely able to manage the challenges in front of m 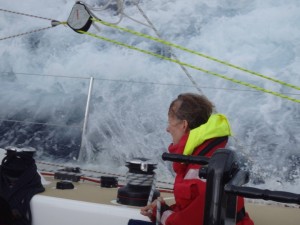 e when I returned to life on dry land.

The next time you are listening to the voice in your head (or the monkey on your shoulder) pay attention to the type of words you are hearing. Watch out for the ‘should’ and ‘ought to’; when you say to yourself “everyone” or “always” challenge the assumptions you are making – who is “everyone” and just how often is “always”. Challenge the first thought that comes to mind so that you can create those brand new happy endings.

This article and the tips in it have been contributed by our guest writer, Alysoun Sturt-Scobie.