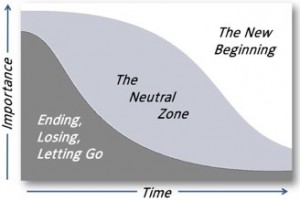 n Model was created by change consultant, William Bridges, and was published in his 1991 book “Managing Transitions”. The main strength of the model is that it focuses on transition, not change. The difference between these is subtle but important. Change is something that happens to people, even if they don’t agree with it. Transition, on the other hand, is internal; it’s what happens in people’s minds as they go through change. Change can happen very quickly, while transition usually occurs more slowly. You move from one “normal” to an altogether “new normal” in three stages.

This stage is often marked with resistance and emotional upheaval, because people are being forced to let go of something that they are comfortable with. At this stage, people may experience these emotions: fear, denial, anger, sadness, disorientation, frustration, uncertainty. A sense of loss. People have to accept that something is ending before they can begin to accept the new idea. If you don’t acknowledge the emotions that people are going through, you’ll likely encounter resistance throughout the entire change process.

In this stage, people affected by the change are often confused, uncertain, and impatient. Depending on how well you’re managing the change, they may also experience a higher workload as they get used to new systems and new ways of working. Think of this phase as the bridge between the old and the new; in some ways, people will still be attached to the old, while they are also trying to adapt to the new. Here, people might experience: resentment towards the change initiative, low morale and low productivity, anxiety about their role, status or identity, scepticism about the change initiative.

The last transition stage is a time of acceptance and energy. People have begun to embrace the change initiative. They’re building the skills they need to work successfully in the new way, and they’re starting to see early wins from their efforts. At this stage, people are likely to experience: high energy, openness to learning, renewed commitment to the group or their role.

Having a vocabulary to understand what you are going through is often the first step to coping well with change and transition. When you are faced with any kind of transition, explore the implications of that transition as a process of moving from one “normal” to the next. Consider the many new realities that you will have to conquer in order to arrive successfully at the “new normal”.

Why not let Maureen guide you through your personal transition with an individually tailored coaching programme?