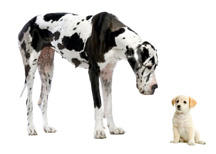 Professor Geert Hofstede conducted one of the most comprehensive studies of how values in the workplace are influenced by culture. He describes the patterns of behaviour that are culturally influenced as the “software of the mind”, a type of collective mental programming. He emphasizes that culture is learned and not inherited and must be distinguished from human nature on the one side and an individual’s personality on the other. Indeed, it is perfectly possible to belong to multiple groups at the same time e.g. to be British, to work for a German company, to be an alumnus of a US university. Whilst we remain the same person in all of these contexts, our behavioral and communication patterns may vary as we adapt to the context of each group.

Most cultural characteristics are not absolute but will fall somewhere along a continuum both for the individual and the group in a wide range of categories – some of which have been commonly identified – such as our relationship to identity, time, power, organizations, communication styles and several others. (Rosinski’s Cultural Orientations Framework is particularly helpful here.) Not understanding the differences can of course often give rise to misunderstandings and provoke unexpected or even destructive responses. This is because for many people, the default setting in our programming is to assume different is worse than that with which we are familiar and comfortable.

Cultural orientation may start collectively with the group, but the impact is on each of us individually – Cultural orientation can divide or enrich depending upon our ability and inclination to rise to the challenges presented by cross-cultural communication. Importantly though, our cultural orientation only partially determines how we think, feel and act when it counts.  As individuals, we each retain the ability to deviate from this mental programming and always have the option of choosing to react in ways that are different, new and creative.

Our Top Tip: Different is different – not necessarily better or worse. Why not choose to be non-judgemental about diversity and let this show in what you think, feel and act – and in what you say and how you say it?